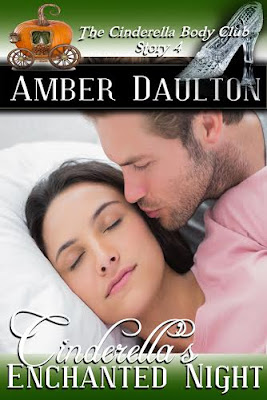 Genre: contemporary romance
Annalise Gallagher wanted Elijah Burleigh. Plain and simple. She’d watched him from afar for months, her friends called her ‘his own personal stalker’, and then she made a wish on a magic pendant for a full-body makeover. Transformed into the gorgeous knockout she’d always wanted to be, she asked Elijah out on a date and wore a haute couture gown straight from Paris to his friend’s wedding.
With just twenty-four hours on the clock, her enchanted night faded into the morning hours and everything crashed down around her. Annalise harbored a shameful secret and Elijah demanded the truth with the veil of magic gone.
The truth, however, could destroy her fragile confidence and push him away forever.

“I’m so happy you came by today.” Elijah’s hot breath teased the sensitive hollow of her throat. His lips trailed across her shoulder blade, down her bare arm, and Annalise almost melted. Then he firmly grasped her waist with his palms and stared deep into her eyes. “I promised myself I would ask you out the next time you came in. If I’d known you worked across the street, I would’ve made time and stopped by to see you.”
“I should’ve put my insecurities aside months ago and just asked you.” Annalise felt vulnerable under his keen gaze. “I don’t ever wear haute couture clothes—this is the first time in my life that I’ve ever worn a dress like this—and I don’t want you to get the wrong idea. I’m not sexy. I’m not a little badass who wears safety pins and skulls on her clothes all the time. I’m just…Plain.”
He cupped her cheek in his palm. “I disagree. I remember the first time I saw you. My nerves were through the roof, I hated using cue cards for my first tour since I hadn’t memorized the information or studied the artwork on my own yet, and there you were at the back of my group. A blue scarf covered your curly hair—it rained that day and I could tell you were self-conscious about your hair because you kept patting it—and a white and blue striped dress hugged your body. You also wore a bulky denim jacket over it.”
“I bought the dress on a whim but I didn’t wear it until my friends dared me to. I felt uncomfortable in it, hence the jacket, so I later donated the dress to a thrift store.”
He sighed. “That’s too bad. Memories of you in that dress keep me awake at night.”
“You’re such a flatterer.” She lightly popped his chest with an open palm.
“True, but I’m not a liar.”
Her smile faltered. Grateful Elijah thought she was pretty before she made her wish on the locket, she doubted he’d want the old her since the former didn’t compare to the new her. She planned to go with Cami to the retirement community sometime next week and visit her grandma. Annalise needed to know everything she could about the magic locket.
“I just want to think about tonight.” Annalise shifted her face out of his grasp and licked his index finger. “Just you and me in these gorgeous clothes and in the most elegant Victorian-style bedroom I’ve ever seen. I’m not perfect, Elijah, and I have baggage you don’t want to know about, but let’s put everything else aside for tonight. Will you make love to me, and accept whatever happens in the morning?”
Elijah tilted his head to the side. “I think you’re underestimating me about something but I don’t know what.” He reached up and removed a few strategically-placed jeweled bobby pins from her hairdo. Her curly locks cascaded around her shoulders. Then he pulled her shawl off her arms, took her purse and laid it on a nearby vanity. His chest rumbled as he spoke. “Okay, tonight will be about sex. Tomorrow, I want an explanation.”