He’ll Steal her… even if she doesn’t come quietly! 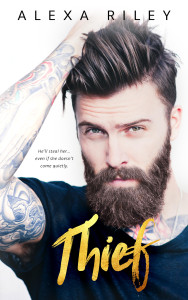 Sean Sparrow has one more job to pull: break into the bank, steal what he was hired to take, and get out. He plans everything to the very last detail, sure of success… until he sees Tessa.

Tessa Martin lives a humdrum life. With a boring job and a crappy roommate, she’s sure there must be more to life than this. She’s not prepared for the muscle-bound bearded man who walks into her life, offering her everything she’s ever wanted.

When Sean breaks down all of Tessa’s walls, she has no choice but to fall hard and fast.

But when the truth comes out, and Sean is fully revealed to her, will their instalove be enough to hold them together?

Warning: This book hero is over- the-top obsessed, totally head over heels in love, and desperate to make babies with the heroine ASAP. If you want a fun read with SUPER hot steam, Kindle-melting love, and a beard to rub between thighs, then this book is for you. 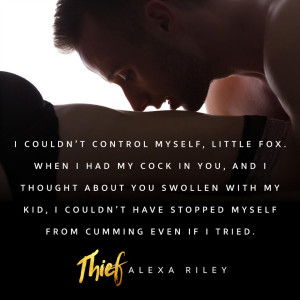 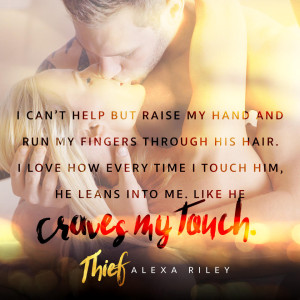 I’m Alexa Riley! Mom, wife, and business woman by day and smut writer by night. I specialize in the Dirty Date Night reading. I wrote my first book, Owning Her Innocence, because well, I just couldn’t find any daddy books to my liking. So I sat down and just started writing, bringing the fantasies I find myself often dancing to in the dark of night to life, one page at a time.
Alexa Riley is my alter ego. I can’t let the other soccer moms know what I’m up to or the guys at work for that matter. Little do they know that they’ve got nothing on my dirty talk.
I’m here to give you a quick fix of filthy dirty smut. Got a few hours to kill? Then I’m what you’re looking for.