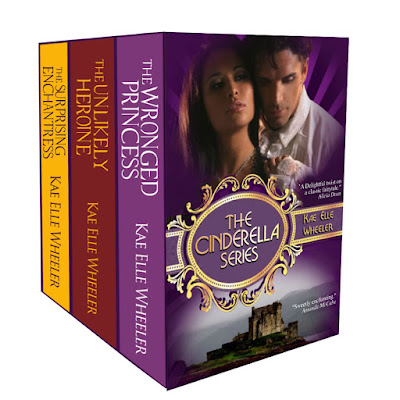 Genre: historical
Enjoy Kae Elle Wheeler’s twist on Cinderella all in one set.
The Wronged Princess – book i
Finding his mysterious princess by trying her glass slipper on every maiden in Chalmers Kingdom sounded like a brilliant scheme until the silly thing slid quite easily on the foot of the wrong girl. Now how is Prince Charming supposed to find his true love? Unbeknownst to either, his mother, the queen and her feisty twin (Cinderella’s infamous fairy godmother) have a lesson to impart—impulsive decisions, do not a future king make!
The Unlikely Heroine – book ii
Lady Pricilla is a modern woman. Marriage and children? Hah! She has brains and intends to use them. But Sir Arnald is different. Isn’t he? And how will they survive when they discover villains embroiled with smuggled goods and danger?
The Surprising Enchantress – book iii
Delusions of grandeur? Happily-ever-after? Lady Esmeralda is destined for life with a fluttering eye syndrome—a deterrent to any prospective intended. Alessandro de Lecce’s efforts to save Chalmers Kingdom and future heir are nil without Lady Esmeralda’s assistance. There is more to this fluttering-eye miss than meets the . . . eye!
The Price of Scorn – book iv http://www.amazon.com/dp/B0103IA1IE
Fourteen years after Prince Charming and Cinderella are crowned as King and Queen of Chalmers, Cinderella and her sisters gather at their mother’s deathbed. Lady Hildegard Roche has nothing but resentment and scorn for the stepchild who culminates all that was stolen from her.
Stunned to silence, the sisters learn how tragedy shaped their mother into the woman she became. The question is: Can they forgive her?
“Sweetly Enchanting.” – Rita Nominee, Amanda McCabe
“The timeless Cinderella tale travels in a whole new direction.” Silver James – Two time IDA Winner
“A delightful twist on a classic fairytale.” Award winning author, Alicia Dean.

Cinderella snatched one arm and Essie the other as they dragged Pricilla into the first unlocked chamber they could find. Lucky for them, Pricilla’s amusement was so great it lessened her resistance.
“What?” Pricilla choked out, laughing so hard she bent at the waist. “I am just having a bit of fun.”
“You terrified that poor chambermaid out of her wits,” Essie accused.
“We shall never survive the aftermath,” Cinderella muttered. Her heart pounded furiously against her chest. She had to get that stick out of Pricilla’s hands, and soon, before she set the entire castle afire or turned everyone into chirping crickets.
“Where are we?” Pricilla asked, swiping tears from her eyes. Once she’d finally calmed enough to pose the question.
“Some poor unfortunate’s sitting room from the looks of it,” Essie said.
“Well, poor they are not, I would venture.” Cinderella cast a nervous glance round. Heavy brocaded drapes blocked out a good portion of the daylight but for a parted sliver. Heated coals smoldered in the hearth, and an empty brandy glass sat on a nearby table.
Cinderella had trouble believing Pricilla bore a single stint of remorse for her theft of the magic stick. In retrospect, it had mattered naught for Pricilla to steal the bread from Cinderella’s plate. She supposed that could not compare to a powerful silver baton.
Why, the two carried on as if Pricilla had not just whipped up a flock of butterflies scurrying round the palace, worthy of Essie’s batting eyes. Thousands of them: monarchs, tiger swallowtails, gossamers of every shape, size and color, all flitting about, covering every conceivable surface. Sending the servants into a horrific frenzy, with the betrothal ball just days away.
Cinderella had to admit, the situation would be outrageously comical, but for the consequences of their shenanigans. She, apparently, harbored enough terror for the three of them. “Do not touch a thing,” Cinderella hissed as Essie picked up the empty brandy glass and brought it to her nose.
Unfortunately, Cinderella’s stark command managed to trigger the opposite effect. Startled, the glass slipped from Essie’s finders. Thankfully, the elaborate rug padded the fall, and the glass rolled to a slow stop.
Cinderella stilled, breath stuck in her throat. Her pulse flailed wildly against the open palm she laid across her neck. Pricilla and Essie froze too. Not for long, however.
“Watch this,” Pricilla whispered, grinning. She extended the silver bar towards the glass, now laying on its side.
Cinderella watched, enthralled, in spite of her misgivings. The glass levitated from the floor and floated to mid-air, swaying precariously under Pricilla’s concentration.
Under her carefully guided journey, the glass was near complete to the table, a spectacular sight—until an adjoining door to the chamber burst open.
Pricilla and Essie’s gasps drowned Cinderella’s. Pricilla snatched her hand behind her back and the glass crashed against the edge. No graceful set down this time as it shattered in pieces when it hit the floor.
“Good afternoon, ladies. To what do I owe the pleasure?” Prince smirked from the doorjamb his arms folded across his chest.
Cinderella could not have moved had someone set her feet afire. He moved to the windows and whipped the drapes aside, flooding his features with late afternoon sun. The effect accentuated chiseled cheek bones and streaks of dirt over shirt open at the neck. His hair was plastered against his head in an unsightly, quite un-princely manner. He reeked of rich soil and fresh air. He was the most beautiful sight she’d ever laid eyes on. Her breath caught in her throat.
“Please tell me you had nothing to do with the mayhem thundering the halls?” Amusement colored his tone.
Heat that flamed Cinderella’s cheeks. Dear heavens, they were sunk. If Pricilla was able to keep the silver baton hidden, mayhap they could escape any real dire consequences. It took every ounce of restraint Cinderella could muster to not drop to her knees and beg for mercy.
She snuck a peek at Pricilla. But before Cinderella could screech out a warning, Pricilla whipped the cursed stick from behind and it slanted to the prince.
Her Prince. How could she!
Rendered immobile, Cinderella’s life flashed before her eyes in a series of dark stone dungeons equipped with a stretching rack, or worse—The Wheel. Administered by an evil, mustached-man armed with a leather strap to snap across her bare back. Essie’s cries would bounce off the dank walls she’d be manacled to. Rodents and other vile critters would pick over their broken bones. The pictured, so vivid, had her gasping for air.
Riveted and unmoving, except for a furious blinking that had the drapes fluttering with the shift in current, showed Essie suffered a similar vision.
Pricilla, however, was not to be deterred. Arm raised, she wore a vague smile on her lips. “My apologies, Sire,” she said softly. She flicked her wrist.
Prince—her wonderful, beloved, Prince—slumped to the floor like a lump of coal.