Each day a group of blogs will present special excerpts from some of the books…look below for the blog hop schedule.

AFFAIRS OF THE HEART

(15 NOVELS AND NOVELLAS FROM YOUR FAVORITE ROMANCE AUTHORS) 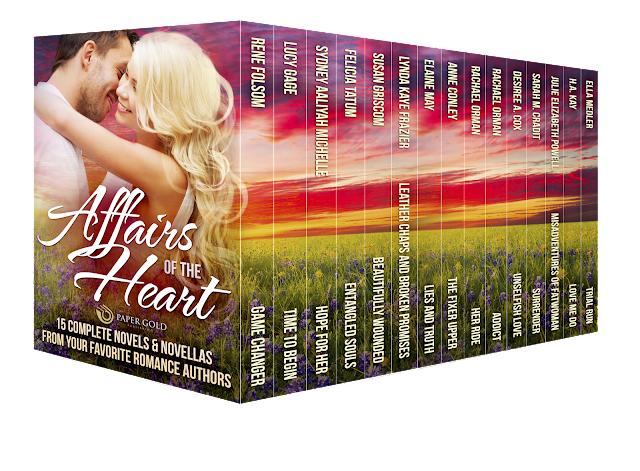 15 COMPLETE NOVELS AND NOVELLAS FROM YOUR FAVORITE ROMANCE AUTHORS IN ONE PRETTY PACKAGE.

Due to mature content, situations and language, this collection is recommended for audiences 18+. Heat levels range from sensual to scorching. All works in this box set have been professionally proofed by Paper Gold Publishing, unless this service was expressly refused by the author. Some stories are written in American, and some in British English. The authors have chosen to stay true to their heritage.

Includes a mix of already released and never-before seen stories, all complete works. Those books which are part of a series can be enjoyed fully without the need to read the complete series (though there is a chance you might develop story-addiction issues—for that, we apologize).

Dive into summer in good company. Affairs of the Heart gives you the chance to make 15 new sets of best friends. Just think about it: 15 hot boyfriends and girlfriends you can lust after, laugh with, or shed a tear for. If there is one thing this set is brimming with is intense emotion. We guarantee you won’t be able to simply walk away, stone-cold, from this collection.

Maci strives for one thing in life—anonymity. With her writing career in full bloom, all she wants is to work in peace while concealing her true identity from the public. Though readers love the science fiction worlds she creates, Maci knows that gender stereotypes could damage her career if she is exposed as a woman.

Liam is the envy of all gamers as the lead developer for nZone Studios. Over time, he builds walls around himself, keeping people at arm’s length who only gravitate to him for his material possessions rather than who he is as a person.

With thick barriers around their hearts and their past looming in the shadows, Liam and Maci challenge each other by slowly peeling away their protective layers and seeing each other for who they really are. It doesn’t take long after their chance meeting at a coffee shop for them to become one another’s game changer.

Note: This contemporary romance novel is the first book in the Playing Games series and contains adult situations meant for ages 18+.

Amelie Watts is sick and tired of being treated like a child. She might be willowy and delicate, but she has strength of the kind that doesn’t show on the outside. Plus, she learned all she needed to know so she could cope on her own. Now, if only her big brother would finally release her inheritance! She would fly to the Bahamas and kiss the backwater she grew up in goodbye.

Jason Watts is fed up with picking up the pieces of his little sister’s life. If only she would grow up already and learn to live life without stabilizers! Her latest idea is insane, and bound to be her most enormous failure to date. But how to make her understand?

Enter Rob Tyson, incorrigible bachelor and Jason’s best friend. For a laugh, they make a bet.

Two people, a hastily acquired boat, and a tropical paradise. What could possibly go wrong?

Zaed, Sophie’s American-born friend, kneels at a party to retrieve a glittering ring from the floor. Before anyone can comment, Natasha, Sophie’s cousin, is shrieking ‘yes, yes, I accept’ to a bewildered Zaed. It’s all a cosmic mistake, but things get out of hand rapidly as Zaed’s father, an old friend of Natasha’s father, bribes Zaed to accept Natasha’s expectations and wed her. But then, Zaed and Sophie fall in love. And the huge, elaborate wedding between Zaed and Natasha, a wedding that will join two powerful families, is next week.

You don’t just back out at the altar. Not in Pakistan…

James, a UK based chef, has tried to make a career with EAT-TV, but his womanizing ways aren’t what they’re looking for with their wholesome family style image. However, the producers of a new reality show about single life, The Fixer Upper, think he’s perfect. Against his wishes his agent convinces him to give it a shot. His overpriced bachelor pad is needing a mortgage payment, and he needs a job to support the tween-aged daughter that’s recently been dumped in his lap.

Margaret Dumas is control freak who has micromanaged her marriage to shambles. When she makes a deal with her mother to quit fixing her up if she’ll do this new reality show, she thinks she’s won. No more blind dates, no more friendly advice, no more “chance meetings” with her Mother’s friends’ sons. The only catch is she’s got to go on detestable reality television and expose her dating habits to a total stranger who is supposed to “fix” her and make her a dating machine. As if.

When Margaret meets James, they clash on the surface, but deep down they recognize something in the other that they want. Redemption.

My name is Alix and I am addicted to sex.

Had been for years. I thought I learned how to live a normal life, but that’s the thing about addiction, it creeps back up when you least expect it. There is no one there for me, no one I can turn to for help. Until I’m given a chance to explore a side of myself I’d always kept locked away. I was lost…until him. I can’t tell you who he is, or why he does the things he’s done. All I can say is I hope one day I behave well enough to take off the blindfold and see the man who controls my addiction. My Master.

My name is John and I am addicted to control.

Together our addictions feed off each other, fueling the fire that burns within. Until suddenly the fire is too hot to handle, burning everything in its path. The pain and scars we’d both come into our fragile relationship with are split wide open, exposing more than either of us can handle, possibly leaving nothing behind to salvage from the ashes.

**Warning: Intended for audiences 18+ due to explicit sex & vulgar language, mention of rape/abuse**

She’d been dealt too many blows to count. He’d always lived life on easy street. Are they Yin and Yang or a mistake of epic proportions?

Makeup artist Reggie Reynolds has endured a life as colorful as her ever-changing hair. After a painful childhood and a tragic adolescence, by sheer force of will, she found success – first in Hollywood, then on Broadway. Returning to her hometown offers a chance to help her aging grandfather and realize her dreams, not to mention soothe a broken heart. But even her storied past won’t prepare Reggie for what happens in her next chapter.

When reporter Eddie Besson meets Reggie on a flight to New York City, he thinks he’s at an all-time high-point in his cushy, perpetual-youth life. Twenty-four hours with Reggie changes Eddie’s perspective. Despite the fact she doesn’t want anything to do with him when he leaves, Eddie can’t stop thinking about the girl from New York City long after he’s gone from the Big Apple.

As Eddie’s perfectly-orchestrated life falls apart, he has some tough decisions to make, with only one thing certain: there will be consequences to pay for his lackadaisical approach to adulthood. Reggie’s own soul-searching reveals some painful truths, including guilt about passing judgment on the guy from Maine. When she runs into Eddie again – this time on his home turf – sparks fly and decisions must be made, choices that aren’t universally well-received. Will this unlikely pair go all-in, find a way to balance the scales and live life on their own terms? Or will tragedy tear them apart for good?

What would you do if you had no place to go and no one you could trust?

Jackson Beaumont prides himself on being a nature-loving, guitar-strumming, carefree sort of guy. When the mysterious Lena Benton walks into his bar looking scared and defeated, it’s not something he can ignore. He’s immediately consumed by concern for her and driven by his desire to help. She’s just so beautiful. So wounded.

After being shuffled from one foster home to another growing up, Lena Benton dreamt of finding her prince charming. When the captivating Troy Harington sweeps her off her feet shortly after high school graduation, she’s certain she’s found her happiness. Unfortunately, Troy’s true colors surface shortly after their marriage and things turn ugly. Lena only has one choice. She has to leave him. She has to run…

Lena’s escape has brought her to Jackson, and he clearly wants to be there for her, but can she trust anyone again after what she’s gone through? And will Jackson be able to help her heal without losing his heart?

Cade is on the road to recovery with Francesca’s love and support guiding him. His life is changing drastically, from attempting to mend the rift between he and his father, to trying to have a normal relationship with his now fiancé. Most of all, Cade must find a way to control his urges so he can be completely released from rehabilitation.

Francesca is building her law firm with the help of those she loves most, but when a close friend reveals her true feelings about Francesca’s engagement, it sends her emotions into a tailspin. Through all of this, she is forced to put her feelings on the back burner for everyone else, until the anniversary of Josie’s accident rolls around. Francesca must learn to put herself first before she falls apart.

In this novella, join Cade and Francesca as they explore their relationship and begin their lives together.

Thank you for picking up this Crimson & Clover short story, SURRENDER. If you’ve read THE STORM AND THE DARKNESS, you will recognize pieces of this from Ana’s flashback to her prom night. SURRENDER is an expanded version of that scene, painting her teenage courtship with Oz with color and context.

Having read other books in the series will provide deeper insight, but they are not required to enjoy this story. SURRENDER is the first of many Crimson & Clover Lagniappes (or, bonus stories). You can pick it up anywhere in your series journey.

I hope you enjoy this quick, lighthearted read about the joyful innocence that accompanies first love.

Andi has always been anxious about her weight and like many women, thinks that unless she is thin, she has no value.

Follow her ‘misadventures’ and see if this is true or will she find there are more important things that makes a person who and what they are?