Trinity Morris, co-founder of You’re Not Alone, has a domestic violence past that still haunts her ten years later. She is devoted to helping victims find freedom and to sharing information on how to help them through their emotional and violent trials. While Trinity is presenting at a seminar, she comes across Gavin, a police officer who knows her past all too well.

It’s been ten years since he last saw her, but the moment Gavin’s eyes land on her, he’s intent on getting to know the woman who has haunted his dreams all these years.
Can Gavin break through the wall that Trinity has built around herself, or will the present and the past collide and take her away from him again? 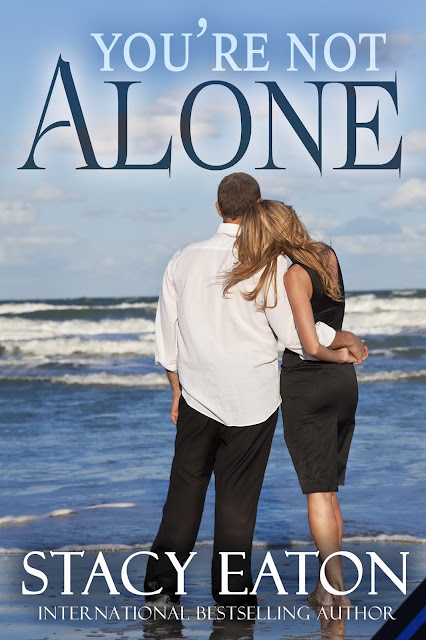 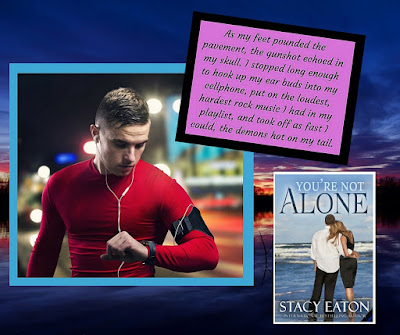 I was usually a bit uneasy before I spoke, and now my empty stomach seemed to be roiling after that memory had passed through my mind.
I glanced around the hallway, intent on finding a peaceful place where I could gather my thoughts. I saw the door down the hallway and quickly entered the women’s restroom.
Inside, I found exactly what I needed, and I sank into a deep burgundy chair in the sitting area. Closing my eyes, I took a few deep breaths.
On the back of my eyelids the memory flashed again, only this time it was with the pulsing flash of amber ambulance lights around me. The strong solid chin, the thin pointed nose, the soft green eyes set back behind thick eyelashes blinked with the lights of the emergency vehicle. He wasn’t looking at me as my eyes opened, he had turned so I only saw his profile for a moment before it was replaced with other people and darkness sank in around me again.
I felt my pulse ticking quickly in my throat, the pain from that moment so long ago almost as alive as the memory. I lifted my hand and allowed my fingers to slide over my throat. I took a shaky breath to shove away the pain.
That was ten years ago and far away from here. There was no way that could be him. 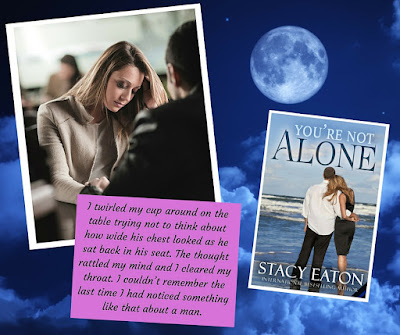 Stacy has been a full-time police officer since 2000. Her current assignment is as Detective of her small town department. She enjoys crime scene investigation; taking a passion in putting the pieces together to figure out the crime. She is also a business owner where she helps people get the awareness out for the causes they care most about. She currently serves on the Board of Directors for her local Domestic Violence Center. She is a mother of two, a son proudly serving in the United States Navy and a tween daughter who is a black belt in Tae Kwon Do and loves cheerleading. Her husband is also in law enforcement. She loves music and photography. Stacy has published 9 novels to date, with several more coming out in 2015.

Domestic violence is not an easy subject to write about but Stacy Eaton has done it in such a way that the story grabs your attention and doesn’t let go.Trinity was abused by her police officer husband for years. Gavin was the young officer who saved her that night 10 years ago. Since then they have moved, Trinity has started a domestic violence training program and Gavin has never forgotten her. Can they overcome their past? What happens when the past comes to visit?

An ARC was received and reviewed for Sin Sisters Books.